OnePlus CEO Pete Lau posted a teaser on Twitter, a clock with the hour hand pointing at 11. This is clearly enough a teaser for the planned Android 11 update that recent OnePlus phones will receive, but there’s some speculation that there may be more to it.

Why use a clock to tease a new OS version? It’s possible that this is a nod at an upcoming Always On Display feature. Before you get too excited, even if that is the case, there’s no guarantee that this feature will be available on older models as the hardware may not support it (at least not in a power efficient way).

AOD could be an exclusive feature for the OnePlus 8T series. Speaking of which, this may be the first sighting of an 8T phone at Geekbench. Note the OS version, Android 11. 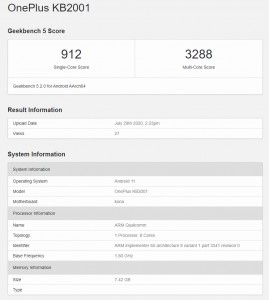 Always On Display is a feature that OnePlus has avoided for a long time. But that used to be the case with wireless charging and water resistance ratings too, has the company finally changed its mind about this feature too?

As for the Android 11 update, if the company follows the established pattern, the OnePlus 6 and 6T will get it, along with all phones that came out after them (the 5 and 5T will remain on Android 10).