How light do you need your laptop to be, and how much are you willing to sacrifice to reduce weight? Acer has decided to test where the answers to those questions like with its new Swift 7, a 14-inch laptop that weighs just 890g and is only 9.95mm thick.

Yes, that’s thinner and lighter than some magazines. It’s a far cry from the 4kg+ laptops that were normal just a few years ago, and will even stand out compared to today’s 1-2kg ultrabooks. In addition to alleviating back pain, it’s also quite a style statement.

A remarkable amount of engineering has gone into achieving all this, but the end result isn’t something that everyone will agree is the best way to go. We’re reviewing the Acer Swift 7 SF714-52T, which has been priced at Rs. 1,39,990 in India, to find out exactly who should and who shouldn’t buy it. Read on to find out what you can expect if you do decide you want to ditch the bulk. 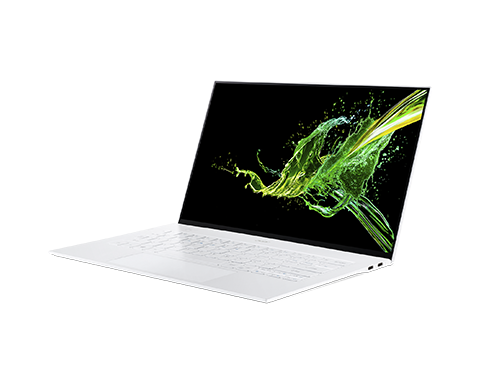 The Acer Swift 7 has a slick, minimalist look

Of course the most important aspect of the Swift 7’s design is how slim and light it is. Once we were done turning in over in our hands a few times, we had to try to see whether that means it’s too flimsy.

We were pleasantly surprised by how rigid the lid is – Acer says it has used magnesium-lithium and magnesium-aluminium alloys which give it strength without making it heavy. The screen didn’t warp at all when we tried to flex the lid, which is remarkable.

The Swift 7 is available in two colours, white and black. Our black unit had a matte finish which looks very elegant, and there are no attention-grabbing flourishes anywhere. The lines are clean and the overall design is minimalist. The lid and lower half are both made of metal.

The hinge is rather tough and you’ll need one hand to hold the base steady while the other opens the lid, or you’ll just wind up pushing the whole laptop backwards.

On the inside you’ll see that the screen takes up nearly the entire surface, with only the thinnest of borders around it. This is a glossy, touch-enabled 14-inch panel and we were very impressed with how Acer has managed to fit it into such a small laptop.

With no room for a webcam above the screen, it’s been designed into a pop-up module on the keyboard deck below. You’ll also notice the power button to the left of the keyboard, though it doesn’t look like one because it’s been integrated into a fingerprint sensor.

The placement is unusual, but for once, left-handed users will be happy. 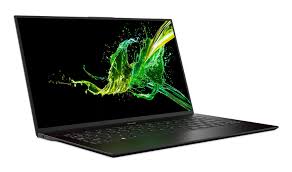 Keyboard usability is often sacrificed when slimming down laptops, and Acer is no stranger to awkward layouts. The Swift 7 dispenses with an Fn key row entirely, shoehorning the Esc key into the numbers row and using Fn key combinations for not only the missing keys, but also their alternative uses such as toggling Wi-Fi and adjusting the keyboard backlight level. Even PrintScrn has been demoted to a combo.

The arrow keys are vertically compressed, but at least they’re somewhat wide which gives your fingers somewhere to rest. Space for the Del key has been carved out of what should be Backspace, and the displaced Tilde finds itself next to Caps Lock.

Pro users who rely on a lot of keyboard shortcuts will be very frustrated. Needless to say, touch typists will have to deal with a lot of mistakes and accidents as well. Still, this layout actually isn’t as bad as some of the compromises we’ve seen on much larger laptops.

There isn’t a lot of space for your wrists because the keyboard has been brought forward. We felt the area to the right of the trackpad get quite warm when the Swift 7 was charging and when any heavy program or test was running, which is unfortunate. 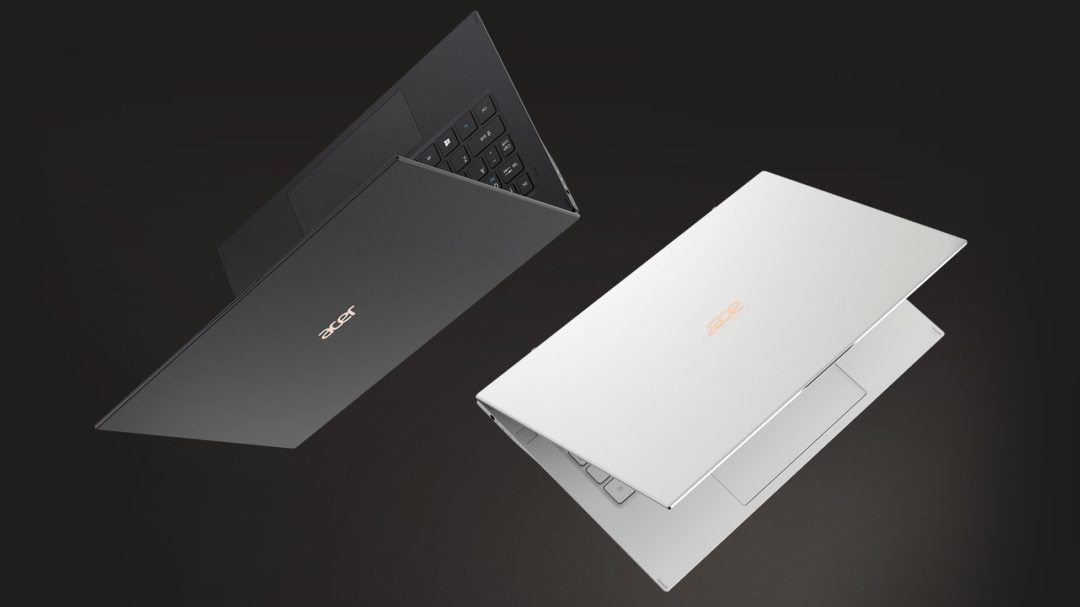 The trackpad is also relatively short, but Acer has tried to make up for that by making it extra wide. It has a physical click mechanism and Windows 10’s multi-finger gestures work fine. Overall, usability is a bit of a challenge, but we did get used to it over time.

The webcam, however, is a disaster. Popping it open, we were treated to a view of our neck and nothing else. The angle isn’t adjustable and you’ll have to awkwardly hold this laptop up like a tablet if you want to be seen by anyone else. Image quality is also quite awful, and the plastic pop-up mechanism felt a bit cheap. We hate when laptops ditch a webcam for style, but in this case it might have been better not to have one at all.

As for connectivity, we weren’t expecting anything more than the two Thunderbolt 3 Type-C ports on the right and 3.5mm audio port on the left. Acer does at least include a dongle which has one full-sized HDMI and USB port each, plus a Type-C port. Keep in mind that this laptop is so slim that Type-C adapters will not fit while it is placed flat on a table. The bottom of this laptop has a channel for liquid spills to drain through, and a pin-hole reset button.

The included 45W charger is pretty small and light, but you could get away with using a smaller one if you don’t need to charge quickly. One of the two Thunderbolt ports will be occupied when charging this laptop. 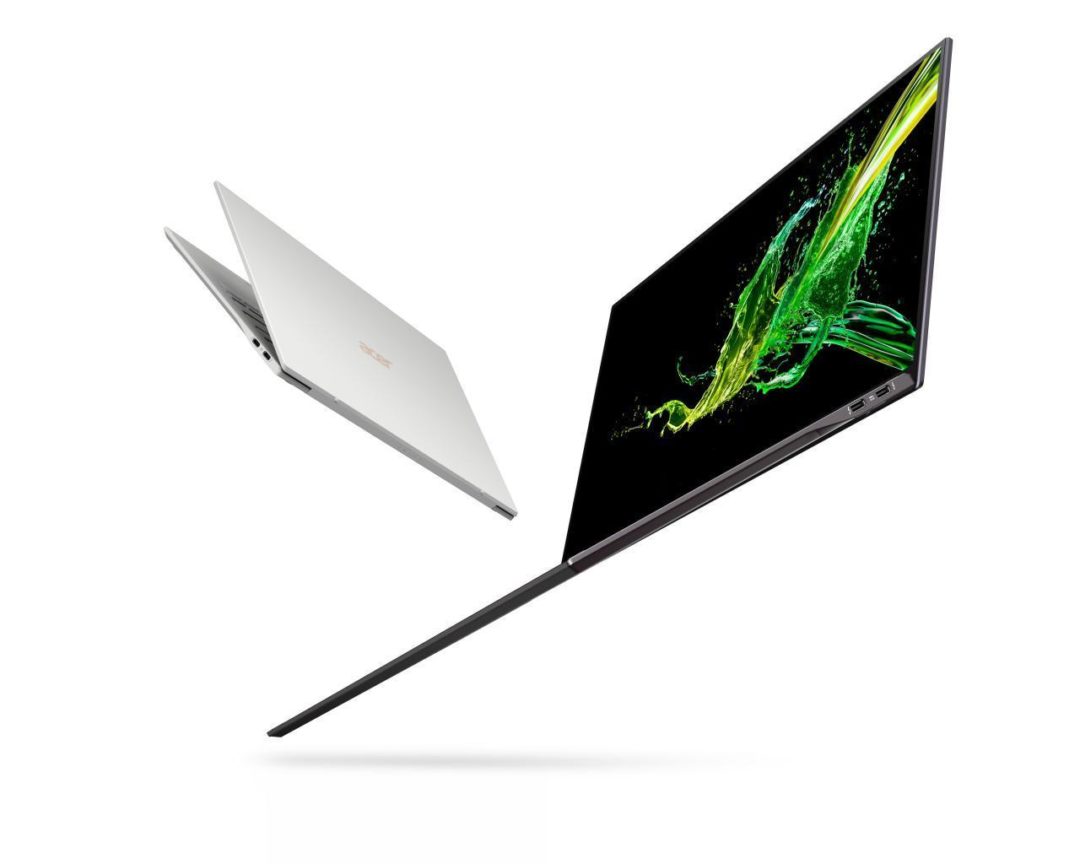 The fingerprint sensor/power button and the retracted webcam

Predictably, Acer has gone with Intel’s lowest-power offerings, the Y-series Core family. Formerly known as Core M, these processors can run without a fan and have a mere 5W TDP rating for heat dissipation but aren’t very heavy lifters.

The Swift 7 uses Intel’s top-end model from the 8th Gen Amber Lake-Y series, which is the Core i7-8500Y. This is still only a dual-core CPU with Hyper-Threading, a base speed of 1.5GHz, and a turbo speed of 4.2GHz.

The touchscreen has a full-HD resolution and runs off the Intel UHD Graphics 615 GPU integrated into the CPU. Keep in mind that other premium compact laptops offer 4K screens with HDR, but the Swift 7 doesn’t. Windows 10’s scaling was set to 150 percent which is fine if you’re using touch a lot, but we would reduce this for everyday use.

Our review unit has 8GB of RAM, though we think that a machine this premium should have at least 16GB, especially since it isn’t upgradable. The 512GB SSD also appears to be soldered down. Effectively, nothing is user-serviceable or upgradeable, and no other variants with more storage or RAM are available in India.

The battery capacity is 31.9Wh and Acer claims 11.5 hours of runtime. You also get Wi-Fi ac, Bluetooth 5, and stereo speakers. There’s no card slot of any kind and not even a Kensington security slot.

You get Windows 10 Pro with quite a few preloaded programs. There’s Cyberlink’s PhotoDirector and PowerDirector which could come in handy, but then there’s also Norton Security which kept pestering us to pay for a subscription. Acer Collection S is an app store that offers promoted content, while Care Centre shows you system information and lets you run diagnostics and update drivers. 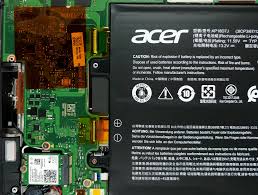 As expected, the Core i7 sticker doesn’t mean much because the CPU inside this laptop is still a low-power, fanless model which can’t really handle heavy sustained loads.

We did notice a little overall sluggishness in basic actions such as opening the Start menu, and apps did take a little longer to load than we would have liked. For day-to-day use though, you won’t notice this much and it isn’t pronounced enough to get frustrating.

If you’re sticking to common everyday tasks such as Web surfing, using Office applications and basic communications, and streaming HD video, you’ll get by just fine.

We struggled a little with high-res photo editing and we wouldn’t even attempt anything as heavy as video or creative work.

Our real-world benchmarks also showed where the Acer Swift 7 hits a wall – compressing a 3.24GB folder of assorted files took a whopping 10 minutes, 5 seconds which is over twice as long as a standard budget laptop would need.

Transcoding a 1.3GB AVI file to H.265 took 5 minutes, 19 seconds which is also way longer than average. These are not unreasonable scenarios for the average computer user, especially someone working as they travel.

As for overall system benchmarks, PCMark 10 gave us 2,133 and 1,850 points in its standard and extended runs. Cinebench R20’s single-core and multi-core tests returned only 193 and 306 points respectively. POVRay took 12 minutes, 11 seconds to complete its internal benchmark. All of these figures are well below what most mainstream and ultraportable laptops are able to deliver.

The 3DMark graphics benchmark managed 2,258 points in the Night Raid DX12 scene and 762 points in Fire Strike. We tried running the relatively old Rise of the Tomb Raider, but even at the lowest settings and dialing the resolution down, it looked like a frame-by-frame slideshow. The integrated graphics capabilities of the Core i7-8500Y are simply too weak for anything more than basic casual games.

The screen is bright and pleasant, though not as crisp as the 4K options you can get on some other ultraportable laptops at this price level. The speakers are tinny and barely good enough for anything more than notification sounds. We did feel that the right wrist rest area got too warm when we were doing anything intensive.

One area in which the Acer Swift 7 did do well was battery life. This is the advantage of the low-power CPU. We were able to use this laptop for nearly a full 8-hour workday on a single charge. The Battery Eater Pro drain test ran for an impressive 3 hours, 33 minutes.

The bundled charger is relatively small and you should be able to use any third-party Type-C charger that meets the USB Power Delivery standard, but we were unable to test this for ourselves. 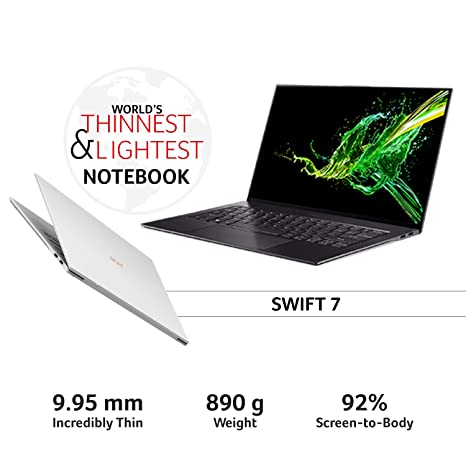 The Acer Swift 7 is unbelievably slim and light, but works well enough for basic use

So are all these compromises worth it, is the Acer Swift 7 actually a useful machine, and should you pay Rs. 1,39,990 for it? Our answers are no, for the most part, with some caveats. Sure, it’s lighter and arguably more work-friendly than even an iPad Pro with a keyboard case, but do we really need to shed so much weight and give up so much?

Similarly priced alternatives such as the excellent Dell XPS 13, HP Spectre x360 13, and even LG’s Gram series (which we haven’t reviewed yet) aren’t a lot heavier and yet offer much more mainstream power levels as well as more practical designs.

Still, the Swift 7 might make sense for you if you want the feeling of sheer freedom you get with a device that weighs so outrageously little, yet has a big screen and the full functionality of Windows 10.

It would be great for getting light work done while commuting, flying economy class, or juggling lots of other things in your bags. If that sounds good, we’d say you should consider whether you can adjust to the keyboard layout and live with the constrained CPU.

We just wouldn’t want anyone to have to use this laptop for all their work, all the time.