If you enjoyed the recent full leak of Samsung’s Galaxy Note20 Ultra, complete with specs and official-looking press renders, here’s another one for you, this time focused on the Galaxy Note20, sans Ultra.

The vanilla model will come with a flat screen, as rumored before, and as made obvious by this render that portrays its side.

The Note20 will have both 4G and 5G versions, the former being ever so slightly cheaper. Regardless of that, you’ll be getting a 6.7-inch 1080×2400 Super AMOLED touchscreen with 60Hz refresh rate, so clearly this is a step down from the Note20 Ultra. The theme continues with the most baffling speculation of this leak – apparently the Note20 will have a metal frame but a plastic back.

That means Samsung may position it as a much more affordable device than the Ultra. Hopefully. Anyway, back to specs, there’s still an ultrasonic fingerprint reader under the display, the same one from the S20 series. 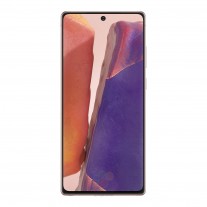 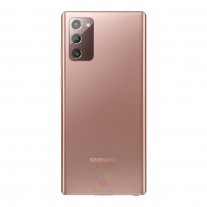 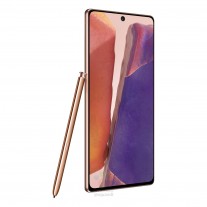 In Europe, the Note20 will be powered by Samsung’s Exynos 990, the same chipset that’s at the heart of the S20 family in markets that don’t get a Snapdragon. The Note20 pairs that with 8GB of RAM and 256GB of non-expandable storage. There’s also no headphone jack, unsurprisingly.

The main rear camera has a 12 MP f/1.8 sensor with huge 1.8um pixel size, and dual-pixel autofocus. An ultrawide camera joins it, with f/2.2 aperture and 1.4um pixels. There’s also a 64 MP 3x zoom cam, with f/2.0 aperture and 1um pixels. 30x hybrid zoom will be offered, and support for 8K video recording is baked in too. On the front, a 10 MP selfie snapper sits inside the centered hole-punch. This has dual pixel autofocus too, and an f/2.2 aperture, as well as 1.22um pixels. 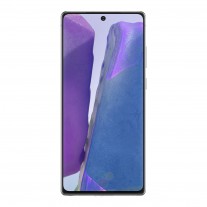 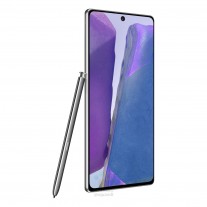 The phone will be IP68 certified, being able to survive in up to 1.5m of water for up to 30 minutes. It also has dual-SIM as well as eSIM support, and a 4,300 mAh battery which will charge from 0 to 50% in 30 minutes with the included adapter in the box. Wireless charging and reverse wireless charging are on board too.

The S-Pen has 26ms latency, which is higher than that of the Note20 Ultra’s stylus. As with the bigger, more expensive sibling, expect a lot of the marketing to focus on cloud gaming, since this model will also be optimized for use with Microsoft’s Project xCloud and Xbox Game Pass. The two companies will also collaborate around Office apps, and Wireless DeX.

Unsurprisingly, the Note20 will run Android 10 with One UI 2.x on top. The 5G model should be unveiled first, at the August 5 online event, and will arrive in Europe in Mystic Bronze, Mystic Gray, and Mystic Green. No details on pricing have been outed on this occasion.