The Microsoft Surface Duo was announced all the way back in last Fall with a time frame for release around this year’s holiday season. Recent rumors point to Microsoft shooting to beat that deadline by as much as several months and judging by how often we’re hearing the Surface Duo mentioned in the past weeks this could indeed be the case.

The latest bit of info concerns a software feature of the Surface Duo and it’s one to do with making better use of the two displays – that’s what the Duo is all about after all. It’ll be called something along the lines of ‘app groups’ (why not ‘duet’, though?) and will let you create pairs of apps that you often use simultaneously and add a shortcut to them on the home screen to open both at once. Samsung has that (where it goes by the name App Pairs), and Sony does too (called 21:9 Multi-window), but it’s way better when you have two screens to work with. It makes one wonder where LG’s implementation is – they do have the Dual Screens after all. 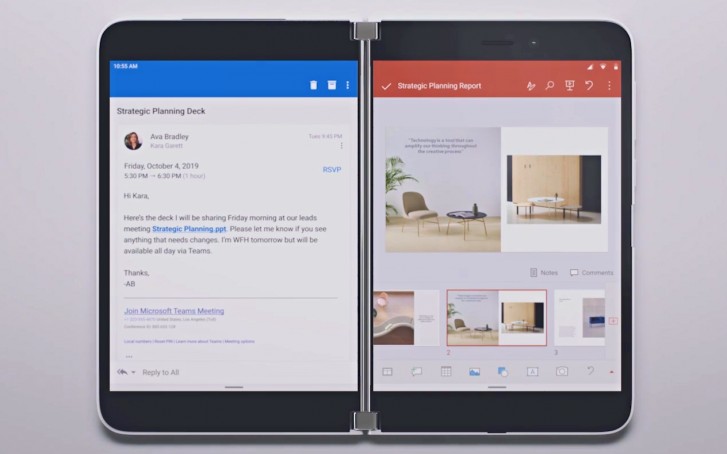 You’ll be able to open Outlook and PowerPoint with a single tap.

Other details known so far on the Surface Duo include the 5.6″ AMOLED displays and 2019 Snapdragon 855 chipset, all powered by a tiny 3,460mAh battery. Support for the MS Surface Pen with an array of features and advanced integration has been rumored as well. The phone/tablet will reportedly launch running Android 10, but Microsoft is already working on an Android 11 update.