Specifications of the OnePlus 8 and 8 Pro leaked last month, telling us how the duo will differ. Today, we are looking at their full specs sheets, complete with pricing info courtesy of a Slovakian retailer which leaves little to the imagination ahead of the April 14 unveiling.

OnePlus has already confirmed that 8 and 8 Pro will be powered by the Snapdragon 865 SoC, and from a previous leak, we know that both smartphones will have two memory versions – 8GB/128GB and 12GB/256GB. However, today’s leak reveals that the 256GB option will not be available in all color variants.

The two smartphones will run Android 10 out of the box, likely with a new version of OxygenOS, and they will come with Dark Mode 2.0 with support for more apps.

A previous leak revealed that OnePlus 8 will pack a triple camera setup, comprising of 48MP, 16MP and 2MP modules, whereas the Pro model will sport a quad camera setup, which will be a combination of two 48MP snappers, one 8MP cam and one 5MP unit. The latest leak sheds more light on the camera department.

The 48MP unit on the vanilla 8 will have a Sony IMX586 sensor, with 16MP and 2MP modules having ultrawide and macro cameras, respectively.

The Pro version gets Sony IMX689 for the main camera, while the secondary 48MP unit has IMX586 sitting behind an ultrawide angle lens, which will also let users capture macro shots of objects from as close as 3cm.

The 8MP module is a telephoto camera (3x optical, 30x digital) with OIS, while the 5MP unit is described as a color filter (machine translated from German) in the specs sheet that will let you capture photos with “unique style through artistic lighting effects and filters”.

The source also claims that OnePlus 8 Pro will feature 3D Audio Zoom and have a flicker sensor in tow.

On the connectivity front, the OnePlus 8 pair will have WiFi 6, NFC, Bluetooth 5.1, and a USB-C port. The duo will also feature stereo speakers and Dolby Atmos and will come with an improved vibration motor.

You can check out the table below for the full specs list below. 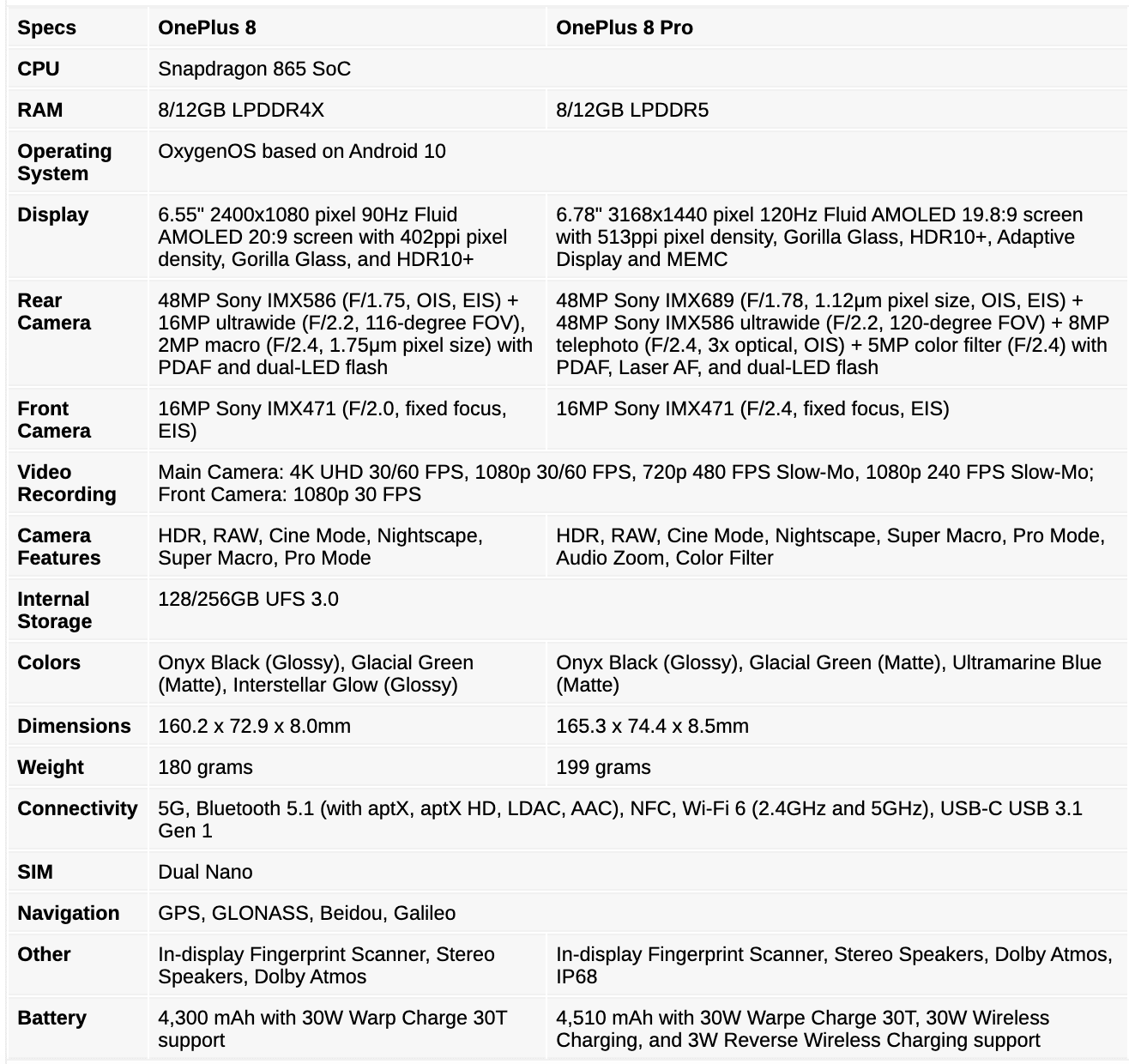